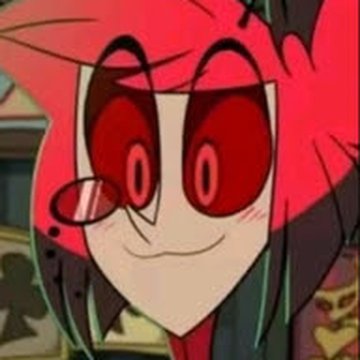 Only the first part though because the notes are limited and I'm lazy.

A spooky thing I guess.

Thank you for using my nonbinary name, also anything for a friend.

Alastor, can I use your "I honestly have no clue" melody?

Forgive me will yah, I didn’t know I had disliked you pieces “partylikeits1920again”.

Ah yes the radio demon, it's truly a pleasure to have such a powerful demon as your best friend.

Oh My! Rosie, how could I have ever missed you on here! I've simply been busy with the hotel I guess! Did I say with the hotel? I meant with my clingy snake boyfriend, who won't let me go anywhere without a fight which he loses every time!

It is quite lovely indeed, you should visit! I bet you'd have a ball! Plus I feel you'd quite like my wacky, gigglemug, serpentine sweetheart! He truly is the sweetest thing, once you get past the eyesore that are his patterns, that is-

Hm, I guess I do. Well, if you wish I could give you a ring on the telephone sometime! Maybe you'd be able to speak with him! But it'd be better in person, his accent makes it hard to hear on the phone haha!

Oh, you'll regret that. He gets quite noisy very quickly. But if you INSIST I can arrange a meeting. Also, stay away from Angel Dust, he's... A but odd. Even by my standards, and I'm a cannibal! hahaha!

Good! When shall we meet? Tomorrow around three, hm? It's usually when I have my break, but then again, Penty always takes me out early!

sure 3 sounds great if you can

Perfection! And you know how much I love perfect! Also, it has come to my attention that I have made a rather embarrassing mistake! It seems I have called him Penty by force of habbit. Silly me!

I assume it is! * Still embarrassed af * Well, clearly not as adorable as he is. Oh! I seemed to be daydreaming again! I truly am a lovesick fool.

yes, yes you are but it's great to see that you've found love

You're right! I think! I'm still trying to get the hang of it!- * My mans be a bit confuzzled * Oh, Rosie, you truly are wonderful to "Hang out" With, as the kids say these days.

ah yes the kids say such strange things these days

They really do! But I believed I have cracked it! With help from Pent obviously, he may be three-hundred but he is a genius, as well as "In with the kids" As he likes to put it.

Haha! I actually think he found it off of the internets, I think that's what it's called anyway.

the "internets"? i don't think i've heard of that- oh yes the internets

The internets indeed, Oh, I'm so excited for our little day! I don't believe I'll be able to sleep! Though, the insomnia has a play into that! And Pent,he's always keeping me up with his little inventions.

i'm excited as well it'll be so fun! and pentious will be and interesting demon to meet

He truly is, well Rosie, I do hope to see you tomorrow! But for now, Goodnight!

why the heck am i still awake its the 4

I have been dead! Mainly because Pent has been annoyingly clingY!

Cha: While we're all inside, we should pave the roads.
An: We need people to pave them though.
Just use asphalt.
Cha: I-
SP: hA!

ohhhhhhhhhhh i get it now alivethed

hEhEhE I need sleep but I want to stay up because I caaaaaannnnnnnn!

HISS HISS LOSERS! I, SIR PENTIOUS HAS TAKEN CONTROL OF ALASTOR'S DEVICE! I SHALL NOW RULE THIS SITE! For as long as Alastor is gone.

What the hell did Pent do here? Ugh, that damned serpent. I'd be mad if he wasn't so adorable.

Angel was being stubborN and he didn't let me eat Fat Nuggets. Pent offered that I eat him, I don't think he meant it literally because when I tried to cut him up he got all aggressive. Snakes are confusing.

oK alastor you are gonna kill me with laughter lmaoooo

What did I do? DAMNED SNAKE! Hdhdhdkcncncjjcncjcncjndndjdndjbdjdj

that snake is just funny and oh dear, dear alastor, how might've your day been?

I tripped over his tail like seventeen times, so today has been great!

I need some space. Pent has been far too clingy.

I have been stuck with a six foot long snake coiled round me for the past six hours. I have lost blood flow to my legs. It is torture. Luckily for me, I enjoy this type of torture.

"Those other cowardly sinners dare not hinder my territorial takeover! A wise decision, the power of my machines are unmatched! No other demon can compare to the likes of I!" "Gee, That was pretty swell boss!" "Yeah!" "I liked the part where you shot them with your raygun!" "I wish he'd shoot me with his raygun..." "At this rate I will seize control of the entire west side of the pentagram by day's end! And nothing, Not a single beast in this inferno of suffering will be able to take back this empire from my constrictive grasp!"
"Oh? You wanna go missy? Well I'm happy to oblige! Nyahaha!"
"You whores have no class! In war the side remembered is the side with the most style."
"Hm, kinky" "Oh, not like that! Pervert!"
"So, Al. You're creepy as fuck, and clearly see what I'm doing here as a joke."
"Maybe."
"We meet again Alastor!" "Do I know you?" "OH YES YOU DO! AND THIS TIME I HAVE THE ELEMENT OF SURPRISE! NYAHAHA! I'M SO EVIL! NYAHAHA!"
"Well I'm starved! Who wants some jambalaya? My mother once showed me a wonderful recipe for jambalaya! In Fact it nearly killed her! You could say the kick was straight out of hell! Hahaha! Oh, I'm on a roll!"
"Now will you shoot me with your raygun?"

hello who are your pfp looks funny

UgH Ima try to actually make something on here lmao

uh duh ofc he does

i did not know

I HAVE RE-ARISIAN! I guess